Sports related injuries are common in today's athletes.  Recent research shows that ACL injuries in young athletes are becoming more common, especially in young women.  Factors related to the increased injury rate are poor mechanics and poor conditioning or training programs.  In addition, athletes are no longer playing in "seasonal sports".  This means the athlete is participating in one or two sports throughout the year with minimal to no recovery periods or variation in training.

In order to address the demand on year-round athletes, a proper foundation or conditioning program is important. This involves consistency, progressing athletes appropriately, individualizing training regimes, and emphasizing safety.  This is vital to the overall training regime.

The warm-up should be specific for the sport and include stretching, balance, sports specific agility and landing techniques.  The primary goal for the warm-up is to help wake up the muscles before requiring the more intense demand needed for playing or practicing the sport.  This will train the body to perform appropriately in order to reduce stress to the ligaments, muscles, tendons, and joints.  For example, a soccer player should incorporate lower body stretching, agility drills, and work on mechanics of landing during the warm-up so that when he/she is in a more intense playing situation, the body will react appropriately. Research has shown that the introduction of a proper warm-up can help prevent unnecessary injuries.

The cool-down after a training day can help return muscles/cardiovascular system to resting state more slowly.  It may help decrease muscle soreness as well.  A cool-down does not need to be long, 5-10 minutes will do.

For further information about what is the best warm-up/cool-down for your sport in order to enhance your performance and reduce your risk of injury, please contact your local physical therapist or trainer.

Last week I discussed the high incident rate of injuries in athletes and ways to minimize injury risk by incorporating specific warm-up and cool-down regimes.  This week, I am going to introduce a tool that not only will pick-out those individuals who are at higher risk for injury but also will give the person tools to reduce that risk through specific exercises.

This tool was developed by Gray Cook and Lee Burton and is called the Functional Movement Screen (FMS).  It was designed to help PTs, coaches, and trainers screen individuals/athletes for risk of injury.  The screen includes 6 tests that are each scored individually.  A total score is a achieved with a cut-off score that has been shown in several research studies to be able to identify those who are at a higher risk for injury.  As a screening tool, it can be used more then once to track progress as well.

The FMS has grown in popularity over the last several years and has been used by many professional sports teams (Green Bay Packers, Baltimore Ravens, San Francisco 49ers), Stanford University and the Military.  However, it can be equally effective and probably more beneficial to younger athletes when first starting their careers (middle school and high school).

Now, we have talked a lot about athletes but in truth, this could be a great tool for anybody who is active.  Injuries can happen at work (the industrial athlete), at home playing with the kids, going up a flight of stairs, or picking up a box.  If you move poorly, you are at higher risk for injury.  So why not identify that risk and prevent the injury before it happens!

It would be great if we all moved well, but the reality is that we don't and when you add load or repetitive tasks to how you move it can lead to problems.  Below is a link to an interesting interview between Gray Cook and Kelly Starrett (another advocate of reducing movement dysfunction).  If you like to work out at the gym (especially those who are in Crossfit or other boot camp/functional movement training), this video will help tie together a few philosophies that have are at the forefront of training correctly.

Arthroscopy surgery and the shoulder

This week I thought it would be interesting to switch the subjects a little bit and talk more about surgical procedures. I am currently working at an orthopedic surgeons clinic and so I am around a lot of patients who are candidates for surgery. You can get surgery pretty much on any body part which makes the topic of ‘surgery’ very vast, so lets focus in on the shoulder; and specifically, arthroscopy surgery. You wonder what that is? Arthroscopy allows your doctor to see and work inside your shoulder through a very small incision using an arthroscope, which is a long, thin instrument with a light at the end. This instrument is used to move inside the joint and the images show up on a video screen during surgery. Arthroscopy surgery is beneficial to the patient as it reduces recovery time due to the the small incisions. There are many complaints of the shoulder that can be fixed or greatly improved by arthroscopy surgery. 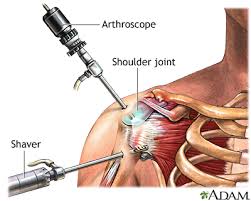 Arthroscopy surgery is definitely plausible for many shoulder injuries. It is also something worth trying before you attempt a shoulder replacement. The benefits include a shorter recovery time and decreased risk of infection. The cost can also be much more reasonable.